The jack-o-lanterns are shining, the air is cooling, and little costumed monsters roam the streets – it’s time for Halloween! A treasured holiday to many Americans, Halloween of course is foreign to our students in Taiwan. Holidays and festivals can provide a unique window into a culture, so here at BGL we try to bring American holidays to life the best way we know how: through engaging content that includes adapted classic texts and virtual field trips. In this case, our seventh-grade students read an adapted version of Mary Shelley’s Frankenstein and virtually visited a Halloween store 6,700 miles away from their Taipei classroom in Glendale, CA. 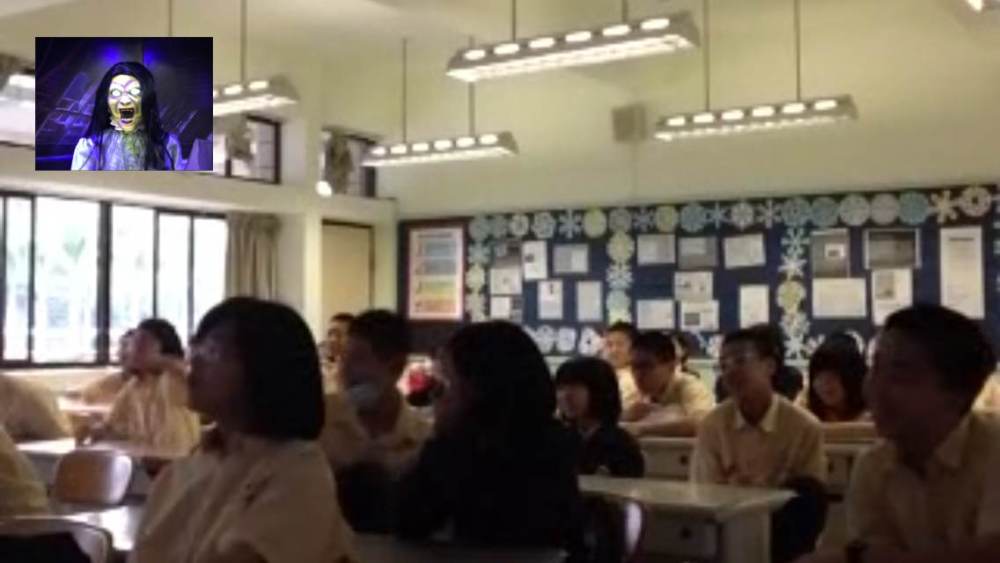 There are two spirit-inspired holidays in Taiwan, the Hungry Ghost Festival and Tomb Sweeping Day. However, these holidays are more somber and serious when compared with the candy-filled, month-long costume spook-tacular known as Halloween. Upon visiting the spectacle that is the American Halloween store, students were amazed at the huge variety of costumes, make-up, decorations and other Halloween tricks and treats.

And, after recently reading Frankenstein, students were able to easily make connections to the costumes they saw in the store. For their coursework the students had designed “Wanted Posters” for Dr. Frankenstein: 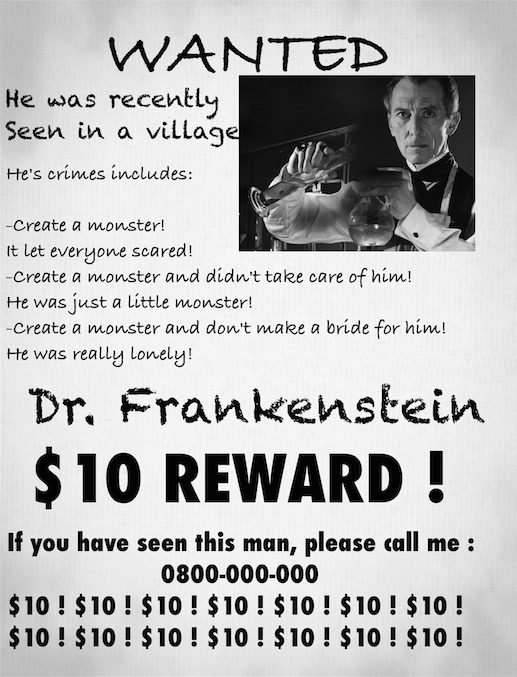 So, they had a good idea of what the characters in the story looked like, including Frankenstein’s monster. After the field trip, students were prompted to describe their own monster Halloween costume and compare them with Frankenstein’s Monster. Here’s what they had to say:

Audrey – My monster is going to look like a deer with feathers and scales. And its appearance will not be as same as the monster. It would be loved by Chinese people. And I will take good care of it.

Bibby – My monster will be very different because the monster may get shot, and everyplace would be bitten, and it will have white eyes. Just like the monster that we saw in the store and cost $5970 NT. I think my monster will make many children cry, and the monster was made for children. So it might have been popular if it didn’t hurt people.

Tina – I would like to use the fake scar, mask and the costume. I will buy fake blood, too, it will make me look really scary. I will make my monster look tall and scary, but he is not kind, like Frankenstein’s monster. If they don’t give me candy, I will give them chocolate egg candy.

Victoria – I would use the thing which can make my eyes look black and without eyeballs, and the special scar-sticker.  The scar would show the experience when he was hit by the villagers, and the black eyeballs show he was cursed by a witch who was in the village.

Matthew – If I were going to make a monster like Frankenstein, I would make it look like Iron Man. I chose Iron Man, because it is cool. My monster’s experience won’t be the same as Frankenstein. It won’t be the same, because my monster can fight the bad guys and help other people, so it will be very popular instead of a terrible monster.

Mike – I will make a monster by using the white eyes, one leg will be gone, and he will have lots of wounds on his body. My monster will scare everyone. The people who are scared by the monster will give me some candy. Because I won the game, that’s whose monster was the scariest.

Yvonne – I think I’ll create a monster that has long hair, red eyes, and sharp teeth. I’ll let her live in my bedroom. But I think I need to clean my bedroom everyday. If I let her just walk on the street, I think it will be similar with Frankenstein’s monster. My creature looks like a…… crazy woman. So I think she really need to stay in my bedroom.

How do you teach Halloween or other American holidays to your students abroad? Share your stories in the comments section.