Students at Tsai Hsing have collaborated with students from all over the world on topics such as Confucianism in the modern world, surveys of the daily activities of students, student blogging, and good old fashioned pen pals. But, our science collaborations are extra authentic and precise since they mirror the way that scientists collaborate in the real world. Our Regional Plant Project was another successful example of this. By combining the power of technology with complex science experiments, Tsai Hsing students went on an educational journey in which they networked with students from two different continents, North America and Africa, to investigate how in-depth scientific concepts manifest in the natural world around them.

From the United States, Menlo School is located in Atherton, CA near San Francisco. About 800 students attend this school. Many students are involved in arts and athletics. 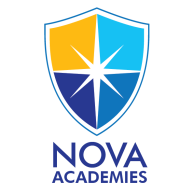 From Kenya, Nova Academics is located in Kikuyu which is near the country’s capital city, Nairobi. This is a high school with both a boys’ and a girls’ school in grades 9-12. Students at Nova participate in a rigorous curriculum that encourages innovation and entrepreneurship.

Each school completed the same experiments – gathering information about local flora – and then students shared their results and compared them with the other schools. Classes were divided into small groups, each with access to the interactive educational platform, Edmodo. The first part of the collaboration was the creation of a virtual “get-to-know-you” video in which students introduced themselves, their schools and their culture to their global partners. After initial introductions, students began gathering and plotting data from their respective school campuses, followed by data analysis that addressed common questions and vocabulary. Ultimately, students shared and analyzed their findings with the other schools and created a culminating video.

Parts of the Project

In Distance Learning class, 701 investigated plants and ecosystems to determine the biodiversity of their ecosystem. According to a Menlo student, “Biodiversity is a term used to identify and describe the diversity of genes, species and ecosystems of a given region.” Each school started by dividing the campus into quadrants. 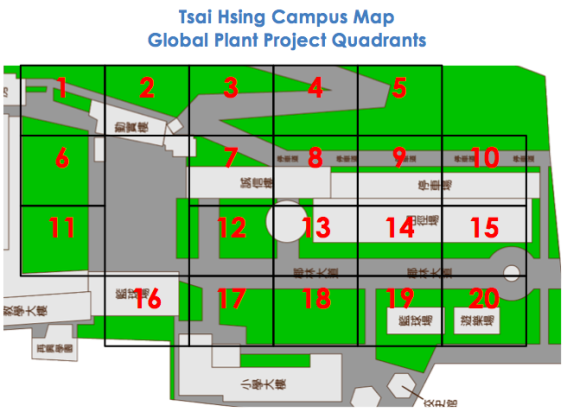 Students went to their assigned quadrant and carefully documented each species of plant they could find. They took pictures so they later could research the plants more closely. Fortunately, at Tsai Hsing Teacher Jimmy has many plants all over campus labeled with QR codes, so students could easily identify most species from the Tsai Hsing Field Guide. Students had to use their excellent English skills to translate the information so they could share it with the partner schools in a slideshow. 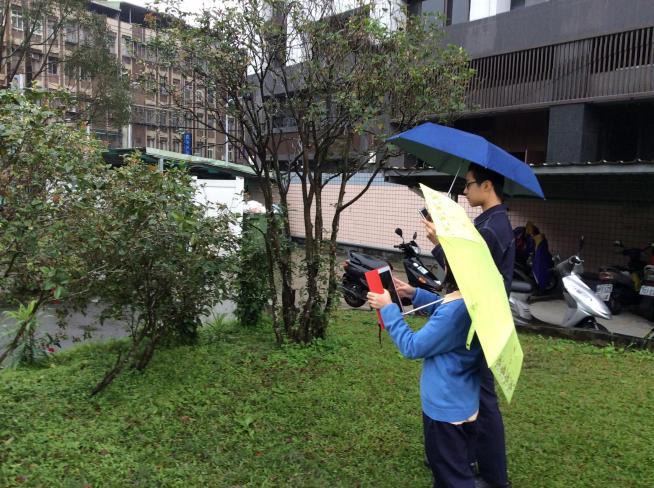 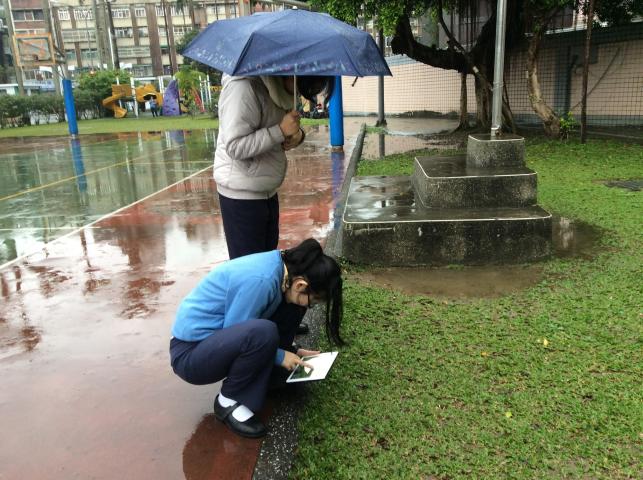 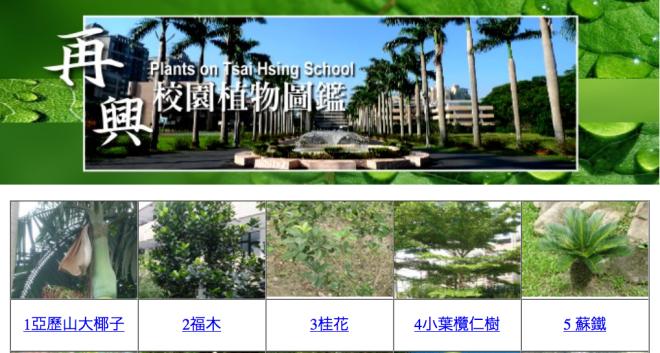 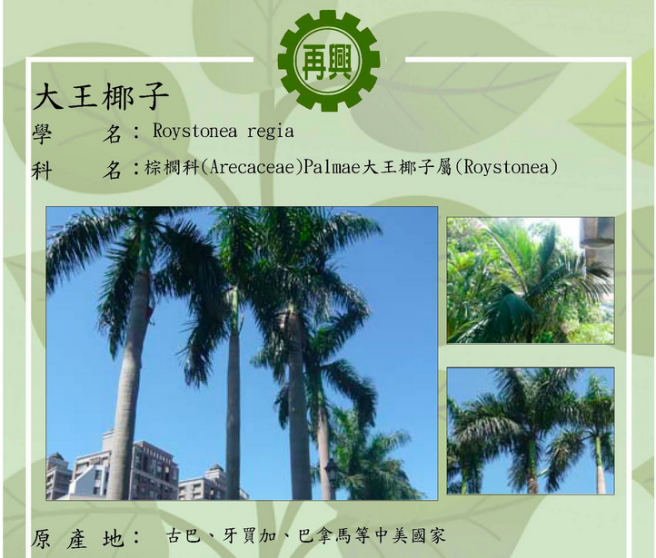 The slideshows that students created included a picture of the plant that they took themselves with their iPad, the scientific name of the plant, and a few interesting facts. They also created a bird’s-eye-view drawing to show an overview of what their quadrant looks like. Students did such a great job, they started to sound like real scientists! 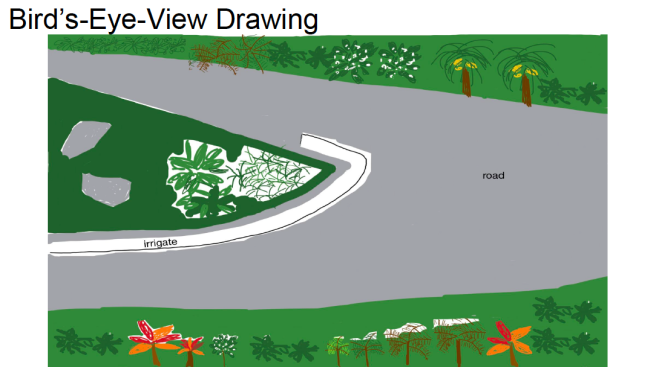 By Bernice, Jonathan and Anna 22: 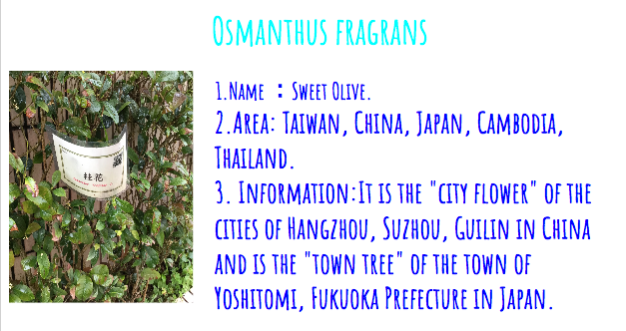 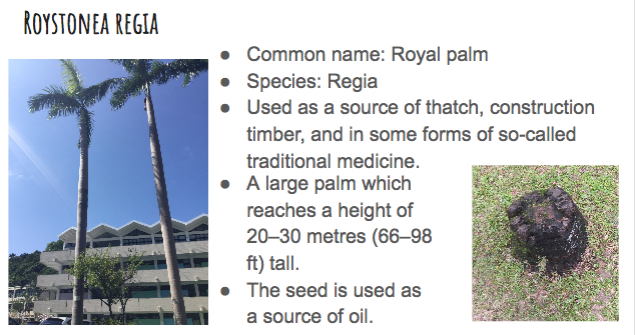 Students then took a break from science for a bit to explore the beauty of nature through poetry. 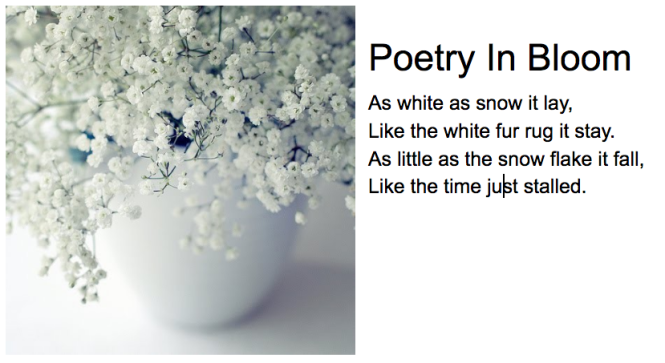 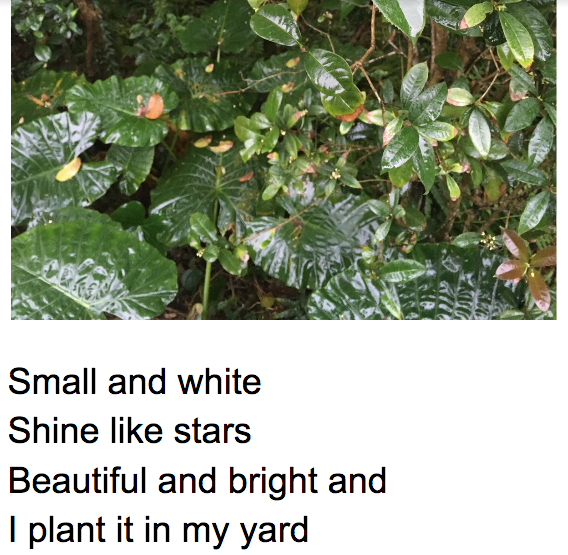 As they identified the species of plants, students also counted them so they could calculate the biodiversity index. The biodiversity index helps explain how diverse an ecosystem is. Generally, the more diversity, the healthier the ecosystem. The results showed that Taiwan has quite a diverse ecosystem!

Here’s what a few students had to say about the biodiversity on the Tsai Hsing campus:

Our quadrant is mediocrely biodiverse. I think the plants there are old and seem to be similar species, so it can be vulnerable if a really strong typhoon comes. More bushes or trees can be planted by the walkway. There are enough plant groups, but more contrasting plants will surely benefit the area. It would be stronger and look better.

Our ecosystem isn’t really biodiverse, our quadrant only has three species and one of it is grass. Grass can be easily killed by people when we step on it. And the Duranta repens it doesn’t seems like it can easily be killed because we don’t see any insects on it. The celosia cristata looks strong, too. When our school find out that the grass is dying, we can’t go on them otherwise they will get worse.

At the start of the project, Teacher Jackie took students on an interactive field trip to her own yard in Los Angeles. Students were able to see the succulents and cacti famous in Southern California. They also learned about the scientific process they would use to determine the biodiversity of their campus. 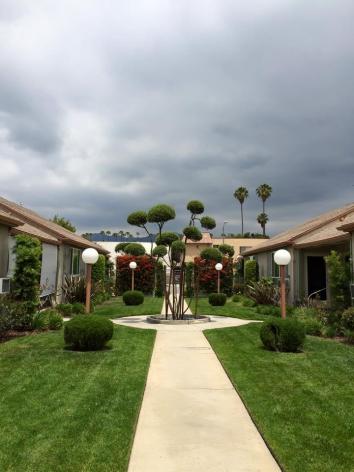 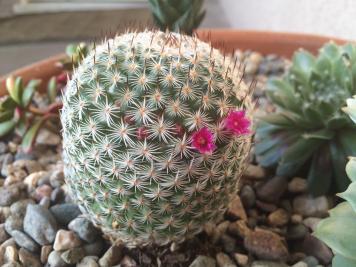 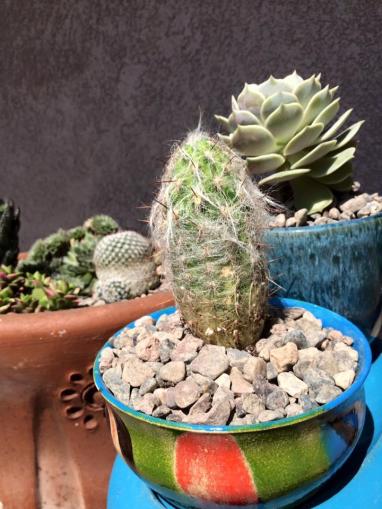 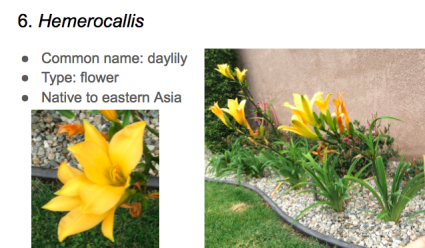 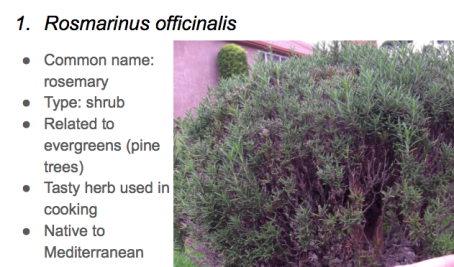 To wrap things up, Teacher Courtney took the 7th graders on another Field Trip Live to the great Pacific Northwest, with a visit to the Carl S. English, Jr. Botanical Garden in the Ballard neighborhood of Seattle, Washington. Before the Field Trip Live, students researched some of the local plants that they would see at the garden. During the trip, students got into teams and played a fun game to identify the plants. It was amazing to see how much students had learned about plants and biodiversity through the Global Plant Project! 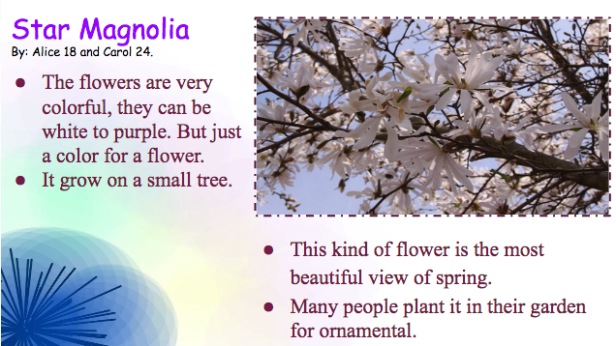 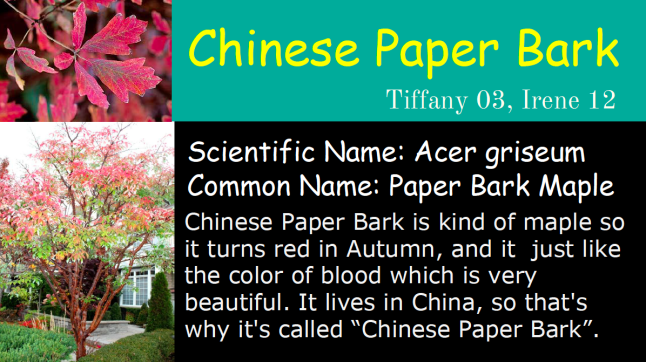 To finish out the project, students wrote conclusions not only based on their analysis of the data from the experiment, but also to reflect on the cultural exchange.

Conclusions About Tsai Hsing, By Julian:

Conclusions About Nova, By Carol:

We got to work with students in Kenya. I’ve seen their videos and their school is huge and full of different plants that I’ve never seen before. I think Nova is a great school and their students are very friendly. I’ll keep in touch with them for sure.

Conclusions About Menlo, By Alice:

The school ” Menlo” in San Francisco work with us for this plant topic. The students there are very cool and nice.Actually, I think I can’t understand their video because my English is not very well before I saw their video. And after, I just do it! I can know what are they talking about! I know my English is growing up! Thanks very much.

This project is so interesting and I want to do it again. I had do this project before when I in sixth grade. I was so happy then and I had said I want to have different pen pals in seventh grade, and I really have now! We even have a video to talk to them. I love it so much!

Overall, students gained some great experience through this international collaboration. While they learned some valuable lessons about science, what they learned about the culture of their partners through sheer exposure is a special opportunity that they will always remember. Many thanks to all of the hard working students all over the world who made this project possible!